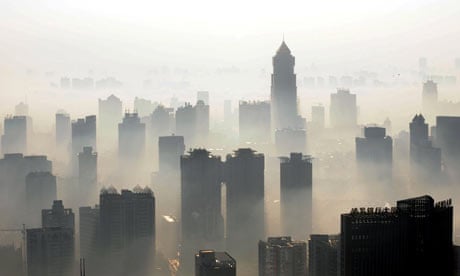 Environmental quality is supposed to be an issue that all true environmentalists embrace and address. Any Dem worth their salt lays claim to this issue without reservation, publicly anyway. AOC screams for the Green New Deal, and they all line up behind her, supporting her 100%.

However, in this COVID pandemic, nary a peep is heard from anyone about potential environmental impacts. ALL of the environmentalists are quiet as mouses about the possible harm that may be affecting people’s health from a simple thing like air quality. An odd lack of concern, considering that one of the primary symptoms of worry with this COVID-19 disease, is respiratory.

Dems like AOC and Sanders push the Green New Deal at every opportunity under the pretense of saving our environment. However, their environment impact is limited to the “climate change” model. Anything that doesn’t fit into that model is disregarded or not mentioned at all.

Where are their voices now concerning the potential impact which environmental factors such as air quality and toxic industrial chemicals have on human life on this planet in the highly hyped COVID panic?

The planet has become a dumping ground for the used products, wastes and emission of modern industry. We don’t know how the synergistic blend of these toxins impact human life on this planet. Yet, where are the Green New Deal voices on this impact during the pandemic panic?

Researcher Jim West has another point of view on this COVID epidemic, one that considers the epigenetic factor of environmental quality. A factor no one has bothered to study in a rush to save ourselves from SARS-CoV-2, anywhere on the planet.

Could it be the “2000-pound Gorilla” in the room that everyone is conveniently ignoring? Let’s consider the possibilities.

The initial epicenter of this pandemic is Wuhan, China. As it turns out, Wuhan, a major producer of fracking fuel, is one of the planet’s most polluted cities. Additionally, Wuhan has deficient environmental standards.

Before the COVID panic, there were street riots over the air quality. The quality of their air was that bad. The government persecuted demonstrators, but their concerns went unheard, which is not a surprising outcome in a Communist State dominated society.

Plume (air pollution app) shows Wuhan on a typical day, which can be three to four times the pollution found on a bad day in New York City. Wuhan is almost always reported as Very High, Extreme, and Excessive.

One, therefore, would expect Wuhan deaths in this COVID-19 panic to be high and continuous. China claims they are not because of their strict quarantines. Yet, Steven Mosher, author of “Bully of Asia,” uncovers the lie here during an appearance on Fox’s Laura Ingraham show stating:

I don’t know why anyone takes China’s epidemic numbers seriously. The Chinese authorities have lied from the beginning of this outbreak. They don’t just fudge the numbers. They make them up out of whole cloth.

You know, in Wuhan, they tell us that from the beginning to the end of the epidemic (it’s not over yet by the way) that 2,535 died.

Well, I think the number is more like 50,000. And let me tell you how I get that number. I get that number because the crematory ovens were going for 60 days, and we estimate they were disposing of about a thousand corpses a day. That’s 60 thousand people.

Mosher stated that Wuhan’s death incidence is ongoing and at least 450 per 100K persons. These numbers are 12x higher than severely polluted epicenters outside of China.

West writes that Mosher’s estimations support the air pollution thesis because Wuhan’s death incidence is proportional to the high pollution levels at other epicenters.

What About Other Cities?

Madrid in Spain reports the next highest death incidences. Spain imports its petroleum products from Qatar, significant exporters of toxic fracking fuel for industry and power plants. As the adjacent photo demonstrates, the air quality in Madrid reflects that practice.

Milan, in Northern Italy, has been called “Europe’s most polluted city” This city imports most of its fracked petroleum products from the U.S. The Plume report for Milan is “High” and “Very High.”

The BBC reported that in the years before the COVID-19 pandemic of 2020, both Milan and Rome routinely banned motor traffic and told people told to stay indoors because of the intense air pollution.

They also reported that in 2012, Italy had the most polluted related deaths in Europe. Over 84,000 people in the nation died prematurely as a result of the poor air quality, according to the European Environment Agency (EEA).

As we all know by now, with all the demands for ventilators, respiratory issues are a significant factor in the COVID-19 death counts. Why is this factor not being taken into account, particularly by those supposedly so concerned about environmental issues?

The BBC report showed a graph depicting how smog compares to other particles and human hair.

What the BBC demonstrated was that smog particles are incredibly minute, one-quarter the size of dust and pollen (2.5 microns in diameter). In contrast, a grain of sand is 90 microns in diameter. You should probably wear a face mask to protect yourself against its intrusions, particularly if you already have respiratory issues. Sound familiar?

A town outside of Naples banned wood-fired pizza stoves because of the air pollution. Are they banning pollutants spewing from toxic petroleum products as wells, or is it easier to just oppress their small businesses?

How About Cities in the U.S.?

Two areas in the U.S. are reporting high incidences of COVID-19 cases:

As it turns out, they are within the two largest petrochemical regions in the United States.

New York City and New Orleans are both adjacent and downwind from the largest petrochemical regions in the Western Hemisphere.

Air pollution also arrives from earth spills, accumulated from centuries of an unregulated industry. These spills are everywhere in the New York City area.

Often, pandemics in the U.S. begin in and are most substantial in NYC, such as the 1918 Spanish flu, West Nile virus, H1N1 flu, and now COVID-19.

West writes of his escape from New York:

In August 2019, after 40 years of loving the Big Apple, I left NYC due to research finding an alarming trend of rapidly increasing air pollution. I had just published my measles research, an environmental study of the record-high incidence of measles epidemics, which, in the U.S., was mostly in New York City.

This was a very sad decision, but necessary for survival. Electric power plants were opening upwind, in upstate New York and New Jersey, in anticipation of the popularity of electric cars and all-electric housing. These plants are fueled by toxic fracking “natural gas”.

Upwind is Pennsylvania, the land of approximately 11,000 fracking sites. Upwind is New Jersey, a major petrochemical refinery zone. Piped through NYC gas stoves is toxic fracking gas. The earth of NYC is soaked with centuries of vaporous industrial spills.

Yet, there is not a mention of the environmental factor in all of this COVID reporting. The COVID panic is attributed to the virus alone and only the virus. One wonders why?

Could it be a way of letting big oil and Corporations off the hook, while providing a rationale used to herd the population like cattle to the detriment of their civil rights?

Protecting Corporate rights and taking away ours. Sounds like a formula for tyranny to me.

Once the environmental factor enters into the analysis of the COVID-19 panic, the game will change.

Suddenly, cities, where the incidence of respiratory symptoms is high, will make more sense.

A triangle of states like N.Y., NJ, and C.T. upwind of refineries should have high rates of lung-related disorders, particularly among the older residents. New Orleans, as well, should fall into that category.

While the Green New Dealers remain firmly mute on this issue, to reap the political benefits of a lockdown strangle-hold, those with sincere environmental concerns should be raising their voices.

The truth is that once this pandemic panic subsides (the sooner, the better as far as I am concerned), the poor air quality in these communities will remain.

Respiratory and other health factors will continue to plague the residents in these urban areas. Unlike the virus, these are impacts that are traceable to a cause- dangerous air pollution. Any Green New Dealers interested or perhaps that doesn’t fit your narrative of power and control effectively enough?

Bayer May Be Regretting It’s Purchase of Monsanto