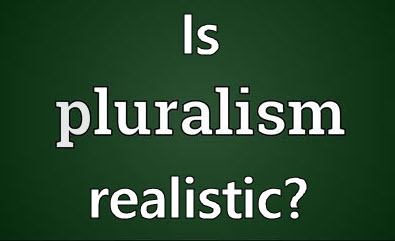 Philosophical pluralism is the belief that all views in society are equally valid. There are no absolutes because one point of view has as much validity as another. This belief is what our so-called “higher education” considers advanced and sophisticated thinking.

However, one of the problems with this mindset is that this way of framing reality is about as clarifying as muddy water.

If there are no absolutes, there are no rights or wrongs because there is no objective standard to judge any individual opinions or actions. One belief or action is as valid as another.

Hitler Must Have Been Right

Hitler was just fine defining Jews as evil and inhuman. After all, a lot of people in his nation agreed with him at the time. That conferred even more weight to his world view.

And well, since all opinions are equally valid, according to the pluralist, what’s wrong with eliminating a few million people here and there if there is a general agreement that they don’t belong on the planet?

The reality is that what a person believes, especially if that person has a leadership role, may have life and death consequences. Pluralism is a big problem, not to mention a fraud as well.

Pluralism fraudulently preaches tolerance for everyone. The fraud quickly becomes apparent and raises the other side of the tolerance coin when the pluralist runs into someone who holds to absolutes.

For example, if you hold the view that killing unborn babies is murder according to the Biblical view that we are all God’s children, watch how quickly tolerance disappears from the conversation on the part of the Pro-Choice advocate.

Often quite quickly, you are deemed a narrow-minded bigot attempting to force your point of view on everyone or some such denigrating position.

It doesn’t matter if you support your opinion with science or personal experience, nothing you say will redeem yourself in the pluralist’s eyes.

You are labeled dogmatic, narrow-minded, or “old school” and dismissed as absolutely wrong (an absolute btw).

The truth is pluralists have no tolerance for points of view that rely upon absolutes since they don’t believe there are any. This intolerance is most apparent if your absolutes reflect Christian morality.

Absolutes Are Critical to Clear Choice

Absolutes are necessary both to keep us safe and also to create a societal order. Without them, society would descend into chaos.

In the moral realm, absolutes determine what is right, leading to order and wrong, producing chaos.

For example, it is wrong to murder someone because you don’t like them for whatever reason or want to take something they have that you want.

That is absolute truth and not a falsehood. Without that absolute rule of the moral law, we would have a society of might over the right or the law of the jungle.

Taking someone’s earned income and giving it to someone else who didn’t produce it is theft. Whether done under the law by government or not, it is still theft, just theft made legal.

Condemning and punishing theft is good because it protects people’s labor, assets, homes, and sometimes lives.

Having an absolute of what constitutes theft helps protect a citizen’s efforts and time. It creates and reinforces civil order.

A pluralist opens the door for someone else to decide how to distribute the fruits of people’s labor best.

It doesn’t matter that the person with more ability to contribute to the success of a business or endeavor should earn more than someone who does less. What counts is that a person who has a greater need deserves as much as those with more exceptional ability.

The pluralist gets to decide whose need is more significant, not the earner or the payor. They didn’t do the work or determine the compensation. Nevertheless, according to Karl Marx, their decision of where earnings go is just as valid as the business owner or the employee.

In a pluralist driven society with no absolutes, there is no secure order. Laws are changed based on what seems best, not what has been established right and wrong.

Political correctness becomes the watchword of the day. What is politically correct today may not be tomorrow. That’s OK. Just go with the flow.

Chaos, not order, reigns the day. It doesn’t work, for anyone, even the pluralist.

We need absolutes, not the pluralist plague of ambiguity.

There are rights, and there are wrongs. When our culture accepted the rights and wrongs expressed in the King James Bible and our Constitution, we grew from a fledgling nation with little international status into the most prosperous, powerful country in the world.

As the murky waters of pluralist ambiguity, water down our morality and choices of what is right, our nation is faltering and fading. Chaos is rapidly replacing law and order.

If we are to get back on track as a world leader, we need to reject pluralist nonsense and its children. Those would be political correctness (aka cultural Marxism) and secular humanism.

It is right to provide opportunity and reward effort. It is wrong to steal other people’s labor and initiatives under the pluralist guise of the sincerity of belief in a society of equality.

The only way to secure pluralist equality is with tyranny.

The best way to advance everyone’s cause is to provide equal opportunity to all irrespective of creed, color, or male/female gender. (Yep, there are only 2 of them proven by biology, not someone’s pluralist opinion.)

The United States grew through the innovations and efforts of individuals, not some idyllic pluralist, egalitarian pipe dream.

The United States will return to growth in the right direction by embracing absolutes based on historically proven values, not namby-pamby pluralism – a lie taught as truth.

Previous Post COVID Hype and Dem Governor Tyranny Up – Mortality? Down Next Post What the CDC Would Rather You Not Know About COVID Tests, Categories, and Their Numbers