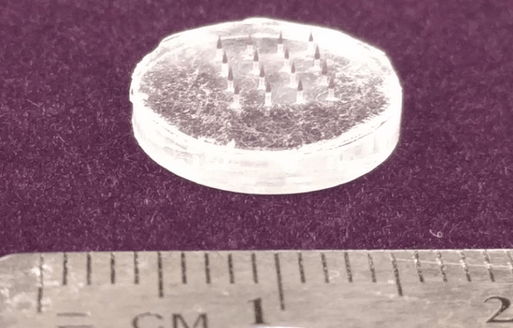 Never let a good crisis go to waste so the saying goes. The Bill and Melinda Gates Foundation sure isn’t wasting any time. They have contributed $21 million towards developing a new injectable, nanoparticle technology vaccine aimed at the COVID-19 (SARS-CoV-2) virus.

This new microneedle technology, funded by Gates Foundation, is being combined with a technology that also embeds a vaccination record under the skin which can be read by a smartphone.

Could this be the “mark of the Beast” from Revelation that some end-times caveats have expressed concerns about?

Another feature they are building into this new technology is that it will be deliverable with “house to house” campaigns undertaken by people with “minimal training”. Part-time summer jobs for teenagers perchance?

The patches carrying the vaccine resemble a tiny piece of Velcro with tiny sugar microneedles. The needles prick into the skin and dissolve. The vaccine then is released into the tiny abrasions and induce a potent immune cell response even more potent than intramuscular injection.

However, based on past strongly toxic responses to virus exposures that bypass the body’s complex immune responses, this is not such a good thing.

For example, aluminum hydroxide and aluminum phosphate, used as an adjuvant (vaccine response booster) is only absorbed at a low rate of between 0.2% to 1.5% from the gastrointestinal tract and generally excreted quickly.

Not so with injected vaccines:

For starters, when you orally ingest aluminum, your body will absorb between 0.2 to 1.5% of it. When aluminum is injected into the muscle, your body absorbs 100%, which is why aluminum-containing vaccines are likely far more dangerous than eating aluminum.

How Aluminum in Vaccines Affects Your Health

The consequences of the total absorption of injected aluminum is extremely significant for the brain since it is a known neurotoxin.

Who knows what adjuvants this new vaccine will contain? You can be sure they won’t be designed to enhance your health but rather like all adjuvants induce an inflammatory response to artificially stimulate an immune system response.

You should also know that vaccines also typically contain preservatives like formaldehyde, another neurotoxin and labeled by the IARC (International Agency for Research on Cancer) as a carcinogen.

Who Is Engaged In This?

According to an article put out by Reuters, Johnson and Johnson and Moderna have signed deals with the U.S. government to produce huge quantities of possible COVID-19 vaccines.

J&J’s deal is worth $1 Billion and will be partially funded by BARDA (Biomedical Advanced Research and Development Authority) part of the U.S. Department of Health and Human Services, meaning public money.

Moderna partners with the Bill & Melinda Gates Foundation as well as BARDA.

Experts estimate that it could be 12 to 18 months before a safe and effective vaccine wins regulatory approval. It is quite likely with the rapidity by which RNA coronaviruses mutate this SARS-CoV-2 we see today will have already modified to a new strain altogether.

That won’t matter however since the real goal here is to develop a new delivery system that can be portably delivered in house to house campaigns without requiring extensive medical training and probably not even licensing or refrigeration.

Will you be scanned at the checkout counter in the supermarket next to make sure you have gotten the latest vaccine? Otherwise, you can’t go through the line?

Not a comfortable possibility the way I see it. Based on the way power handles more power, I don’t foresee good things resulting from an easier way to deliver toxic vaccines to more people. But hey, never let a good crisis go to waste right?