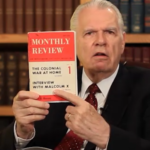 Let’s be honest with each other. Most of us these days conduct our lives without racial overtones. Our liberalized educational systems have done a good job of promoting egalitarianism. After all, equality is necessary to collectivize a population which is what they are ultimately after which is:

One nation under the State. (Forget the God part of the pledge of allegiance. Authority is doing their best to eliminate that meaning, especially one that is based in Christianity.)

However, government has much to gain from racial conflict, although this will never be admitted to by the government.

Fact is, class conflict (like whites vs. blacks or vice versa) is a big part of how Marxists spread their influence and it is more a part of where this is heading than most of us care to be aware of.

Yeah, well, blacks kill each other in the thousands each year. Somehow it escapes media scrutiny however. They remain curiously silent on the issue.

It appears that Black Lives Matter only if they are killed by white police.

If the shooter is a black killing a black apparently this is permissible, even though recent FBI and DOJ figures show that over 90% of the black deaths are at the hands of black people themselves and only about 1% by white police- the reality of black lives being murdered doesn’t seem to interest Black Lives Matter.

Seems to me that if this were really about black lives and they really mattered, there would be a focus on where the majority cause was- not on the smallest percentage of the issue.

Is there perhaps another agenda going on here that the media conveniently turns a blind eye upon? It would seem so.

Watch more about what Black Lives Matter is really about here:

Meanwhile, a black power group has claimed responsibility for the Dallas shootings. B.P.P.O. (Black Power Political Organization with the raised fist Communist salute in their logo of course.) Note the Communist Raised Fist on the Facebook Page which has since been deleted.

What will be interesting here will be the results of any investigation. Three suspects were gathered up. Will they quietly disappear like the JFK hobos,  the suspects picked up after the Boston bombing, the Sandy Hook suspects and numerous other incidents where they have quietly slipped away revealing nothing.

Reminds me of the reality based film Lords of War after the protagonist Nicholas Cage was picked up and then confidently predicted his own release because “they need me”. Keep your eyes on what happens to these “suspects”. My guess….nothing.

Despite the claims of the end of Communism in the 90’s, Communist influence is alive and well- just re-labeled to protect the guilty. Watch the video below to get a sense of what you are not being told about the events in Dallas. it is not by accident either:

Alex Jones covers more on this issue and what the public doesn’t know here (including a statement by Ben Carson on the issue):

No one who wishes to be free supports the abuse of power. Of course, police shooting citizens is wrong. However, one wonders that if the shooter had been a black police officer shooting a white driver whether there would have been any media focus on the issue.

Nevertheless, does this justify the deaths of 5 police men and 7 others injured and placing ordinary citizens in danger in an organized shooting as a response? What response is there to the continued deaths in the black community by other blacks? Where is the media spons

Is the New World Order Beginning to Unwind?

Are the globalists, who are hungry for their New World Order, getting desperate as they lose control of how the masses are supposed to act and react? Are these shooters really just manipulations designed to allow the imposition of more controls over the people who are awakening to a growing awareness of government Draconianism?

Keep your ears and eyes open but your head down. Things may get progressively worse from here. Better get ready for some change they need.

Previous Post Will the Real EU Please Stand Up? (Don’t Count on It.) Next Post Update on the Dallas Police Shooting- Folks, We Have Another Sole Gunman In Dallas