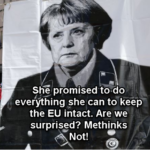 After the vote by the British people (Brexit) to exit the European Union (EU), we are now seeing a buzzing confusion of effects. Financial markets have dropped globally. Politicians are coming out and chastising the vote. Warnings are being issued such as the one from Angela Merkel who warned Britain that it won’t be able to ‘cherry pick’ EU privileges. She also vowed to use ‘all her strength’ to prevent the bloc from crumbling.

It may not all make sense. But perhaps this article will help you sort it out a bit.

Now, one has to wonder why the leader of the largest nation in the EU is so dead set on retaining the format- the “European Community”. Perhaps it has something to do with former East German collectivist Merkel’s socialist leanings?

After all, Europe after the implementation of the EU structure in 28 member nations, has drifted decidedly towards the left. It strongly seems to embrace collectivist socialist idealism as the way create a fairer and more equal society now. Of course, that is a questionable assumption based on the results which are oft times ignored.

That, of course, does not stop it from being spread as the definitive solution to the greed of man however. Idealism trumps facts it seems. And as Lord Acton once stated: Power corrupts. Absolute power corrupts absolutely.

Then again, as the largest economy in the EU, Merkel wields no small influence in the EU. She may now feel a twinge of regret over losing the ability to lord over Great Britain, one of the nations that defeated Germany in WWII, thereafter creating the East-West split of Germany.

Could Angela be expressing a bit of spite as Britain rejects her favorite pet and secondarily spurns her control? Leaders like Merkel do have big ego’s after all or they wouldn’t seek the positions of power they hold in the first place.

What is not mentioned (another deception by omission BTW) is that the EU is a tool of the financial elites and power brokers who largely control our lives already. We see this in their statements about the New World Order which surface from time to time by high level politicians and other shakers and movers like Henry Kissinger and friends.

This New World Order points to the real EU and its primary purpose. The EU that the power brokers in international finance and politics wish to establish to enslave us all under the New World Order or one world government controlling political, economic and even cultural expressions. Behind the red herring focus on trade, this is the real EU.

The EU had its beginnings in trade. (Free trade agreements- sound familiar?)

“War had left Europe exhausted, with industry greatly damaged and their defenses possibly unable to stop Russia. In order to solve this six neighboring countries agreed in The Treaty of Paris to form an area of free trade for several key resources including coal, steel and iron ore, chosen for their key role in industry and the military.”  –The History of the European Union -Robert Wilde

Initially, it applied only to the coal and steel industries. Over time, it morphed into its present form the European Union which was created by the Maastricht Treaty on November 1st 1993. However, the real purpose of the EU is evident from its “fruits”.

Since 1993, new nations have been added to the EU. As they are added, the EU quietly replaces their nations sovereignty with the regulatory bureaucrats of the EU headquarters in Brussels.

At present, the EU has replaced the sovereignty of 28 nations (27 now if Britain holds up) with a bureaucracy that regulates the lives of its members as the free YouTube video Brexit- the Movie  notes with examples of its impact in Britain.

As noted in the film, the EU has become “power without accountability” under the thumb of highly paid EU bureaucrats (over 10,000 earn more than the Prime Minister of Britain or one out of every 5 EU employees).

The EU members do not elect these people, nor can they do anything about their decisions. It they (the member EU nations) protest a regulatory decision, it is debated in committees of unknown participants who hold their meetings in closed door sessions and deliver their decision which must be accepted by the member nation government and its citizens- like it or not.

What the EU Really Is

The EU as it operates today is essentially a regional government that has replaced the sovereign capacities of its member nations with an un-elected bureaucrats in Brussels. They have developed their own court system along with the central bank issued Euro currency. They are also developing their own police force and military and more. All in addition to the mass generation of regulatory control over the economies and people of the member nations.

What the EU is Leading Towards

Once established in Europe, other regional governments are also being stitched together under the guise of “free trade” agreements. However, there is nothing “free” about the trade in these agreements.

If you read the Preambles of all of them, you will note that what they actually do is place the nations in these agreements under control of the WTO through GATT. The WTO is an arm of the UN. This same structure is applied in all of these so-called free trade agreements. For example, look at the U.S. – Columbia free trade agreement as follows:

The Parties to this Agreement, consistent with Article XXIV of the GATT 1994 and Article V of the GATS, hereby establish a free trade area.

Article 1.2: Relation to Other Agreements

The Parties affirm their existing rights and obligations with respect to each other under the WTO Agreement and other agreements to which such Parties are party.

As a result of this so-called “free trade” agreement. The U.S. and Columbia affirm their “existing [trade] rights and obligations” with respect to each other to the WTO, an arm of the United Nations.

A little more digging into these agreements however sees that it generates more than control over trade alone.  With chapters on financial services, telecommunications, electronic commerce,

intellectual property rights, labor and the environment which you will find the in the Columbia agreement one has to question how these portions of governance get wrapped up in what is ostensibly supposed to focus on “free trade”.

There is more but to make a long story short- the reasons behind the backlash is that these are punitive moves that the financial elite are carrying out to show the other EU nations who is in charge and what can happen if you dare question their authority and challenge their power.

Keep this in mind as you watch the impact of the British decision. There will be more punitive measures wrapped up in warnings like the one that Angela Merkel, for example, just announced indicating that Britain will not be allowed to “cherry pick” which provisions they wish to retain. Unless other nations join the Brits, they will be made an example of so that other nations dare not vote to exit.

There will likely be economic punitive repercussions as well such as the recent downgrading of Britain’s investment rating by Moody’s. British debt hadn’t changed in the last few days. Suddenly, however their credit rating needed to be adjusted. Perhaps, the same standards should be leveled on all of the EU nations since a good number of them are in far worse shape than Britain such as Greece and Italy.

As long as they tow the line and hang in there in the EU, their ratings will not move appreciably or quickly

Personally, I hope the whole thing unravels. Unfortunately, there will be some very painful effects since international financiers through their central banking schemes have inflated the dickens out of currencies globally. However, its unraveling is a monkey wrench in the establishment of their New World Order and ultimately an opportunity to recover the freedoms which have already disappeared.

The operative word there being “opportunity”. Nothing can be counted upon when human beings are in control as thousands of years of human history attest. Perhaps it is time to consider another authority? If we can get around the cultural Marxism and secular pluralism our educational system promotes that is. Ahhh….but that is yet another can of worms not to be opened here. Keep your heads down and your eyes opened. This could get quite dicey as they say.

The Real Cause Behind the Incessant Whining Over Donald Trump

Previous Post Why British Politicians and Non-Profits Like the EU- No Brexit for Them. Next Post What the Public Will Not Hear About Dallas Police Shootings from the Government or the Media