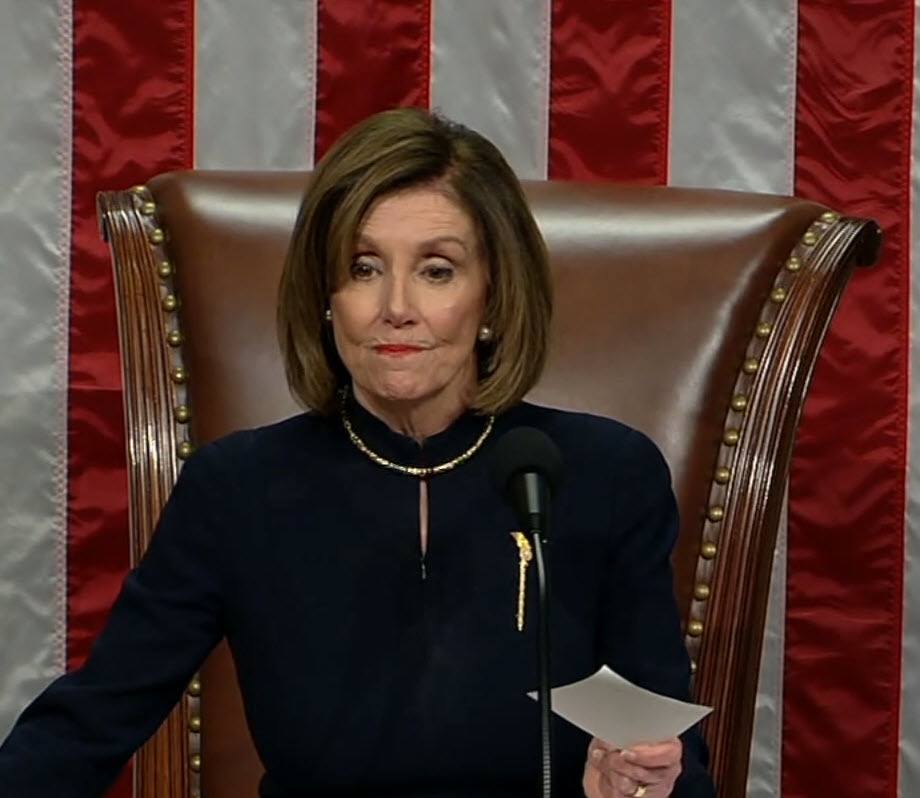 First of all, Donald Trump has not been impeached. Those who claim so do not understand the Constitution. The House has no authority to impeach the President, the Senate does.

All the House can do is vote on Articles of Impeachment that they draw up and pass. After that, all power passes to the Senate which has the final say.

The Senate shall have the sole Power to try all Impeachments. When sitting for that Purpose, they shall be on Oath or Affirmation. When the President of the United States is tried, the Chief Justice shall preside: And no Person shall be convicted without the Concurrence of two-thirds of the Members present.

What if Pelosi Doesn’t Send the Articles

If the Articles are never sent and kept locked in Adam Schiff’s desk in the basement of the Intelligence Committee will that have any impact on the process? Well, actually…no.

Mitch McConnell can simply call a vote to dismiss the entire impeachment process, even if the articles are never sent. This is because, as noted above, “the Senate shall have the sole Power to try all impeachments.”, not the House.

As noted by Joel Pollak, at Breitbart News:

If Pelosi refuses to submit the articles of impeachment to the Senate, McConnell can convene the Senate anyway, summon the Chief Justice, and swear in the Senators as jurors. Democrats can boycott, but they can’t stop the trial.

McConnell can then propose to dismiss the charges or even hold a vote to acquit the president.

Pelosi can hide the articles of impeachment in Adam Schiff’s basement forever, and it won’t make a bit of difference.

Mitch McConnell has no responsibility to concede anything to Nancy Pelosi. She has no power over the process now. The ball is squarely in the Senate’s court and McConnell holds all the cards.

Nancy is officially caught between a rock and a hard place. In fact, this is simply another blunder by Pelosi. She is essentially caught in her own trap. McConnell has all the power now. Nancy has none.

In fact, what Nancy is doing now is exactly what the Democrats accused the President of doing.

She claims she is withholding the articles to pressure McConnell into holding a “fair trial”. The very thing the House Democrats did not give to the President:

Now, after charging the President with “quid pro quo”, Nancy Pelosi is withholding the Articles of Impeachment to get what she wants, allegedly a “fair trial”:

Pelosi said. “So far we haven’t seen anything that looks fair to us, so hopefully it will be fair.”

Not only is that a bogus claim but also complete hypocrisy since they claimed “quid pro quo” was an impeachable offense.

It is especially hypocritical mainly because the President was given nothing fair and the whole process was a railroad job. As noted by Republican questioners, the Democrats have indicated that they wanted to impeach the President even before he was sworn in.

From here, it can either be dismissed or go to trial. If the articles are sent over, there may be a trial or they could simply dismiss it on a majority vote.

If they don’t send the articles over, they can simply dismiss it without the articles and exonerate the President as well.

Pelosi has nothing to offer in the process. Her show trial, dog and pony show is over. McConnell should simply stand by his guns, ignore Pelosi and do what he chooses to.

If they hold a trial, call all the witnesses that the House would not such as the whistleblower, Eric Ciaramella– an Obama holdover who worked under Susan Rice Obama’s national security advisor, Hunter Biden – who received millions from Ukraine through Burisma after his VP father was assigned control over Ukraine’s aid from the U.S., and Adam Schiff – who met with the whistleblower before he submitted his complaint.

The Real Reason Nancy Is Holding Back

If the Senate holds a fair, public trial this whole impeachment sham will be exposed.

A fair process would call:

A fair trial in the Senate will be presided over by a Supreme Court Judge with all witnesses placed under oath.

The President would be permitted to ask for witnesses and defend himself.

In other words, a fair trial would be conducted under the due process rules any accused individual should be entitled to. None of these basic rights in our judicial system were permitted during the Dems kangaroo court as noted already.

The public is already underwater on this whole process. A trial in the Senate would expose it even more starkly than is already known. The Democrats will be exposed for the liars they already are.

They know it. So, let’s see what happens. Right now the victory is nothing more than a hollow one with no teeth to it. My guess is that Nancy is probably hoping that it stays that way.

I hope it doesn’t.

Previous Post Do You Know What Is Really in the USMCA? Most Do Not Next Post YouTube/Google Censorship of Pro 2nd Amendment Videos