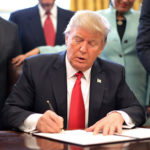 A popular promise of Donald Trump at the end of his campaign was to “drain the swamp”. This promise resonated with the growing number of Americans who are paying attention to the Leviathan growth of government in the recent decades- $21.2 Trillion national debt and growing daily.

As pointed out on Michael Hodges- Grandfather Economic Report site, in 2016 total government spending (federal, state and local) amounted to 45% of the total economy. Hodges also notes that it does not include the added cost of government regulatory compliance costs which adds another 14.9% adding up to a total of nearly a 60% impact on the U.S. economy.

I noticed this during my commute to work on Federal holidays. Working in the private sector, I began to notice lighter traffic and parking while commuting into the center of the city for

my work. I didn’t immediately make the connection but after a while it began to click. The significant difference in traffic (even foot traffic in the city) and parking correlated to Federal holidays. I had forgotten that all workers are not the same.

I had also forgotten that the public sector had expanded far beyond what it used to be. A drain on private sector production, government has become a swamp stagnating the flow of money in the private sector which traditionally made America great, as the saying goes.

In a statement on May 22nd, before he signed 3 new executive orders to effect change in the federal bureaucracy Trump said:

“To empower our civil servants to best help others, the government must always operate more efficiently and more securely.”

The first order was aimed at strengthening accountability for federal employees making it easier to fire poor performers. In the private sector, which is based on performance and profit, this would be like putting legs on a snake. In the public sector, it is a step in the right direction. Whether long term bureaucrats will implement it seriously remains to be seen.

The second order creates a federal labor relations working group to analyze government contracts. It also makes it harder to pay federal unions to appeal firings and to lobby Congress.

The third order targets waste and expenditures. It requires federal employees to spend at least 75% of their time working on the job they were hired to do, not federal union work. It also opens the door to allow the federal government to start charging unions for office space in federal buildings.

The federal employee unions are claiming that these orders are “a direct assault on the legal rights and protections that Congress has specifically guaranteed to the two million public-sector employees across the country who work for the federal government.” said J David Cox, President of the 700,000 strong American Federation of Government Employees.

They plan on taking its challenge to Congress and the public.

According to chron.com in 2012, there were 21,656,200 government employees who were earning at about a 9% higher average wage than the private sector. Those levels may have grown a bit during the last term of Obama and hopefully are shrinking under President Trump. Nevertheless, there is a lot of money and future debt at stake here, so we should look a bit at the authority (not the need) for executive orders.

Executive orders should not be used to create laws. Congress was ceded that authority with the President having only the authority to sign off on them or veto bills which ultimately creates regulations and laws. However, even veto’s can be overidden by Congress- a check and balance design of our government.

Therefore, President Trump does have the Constitutional capability of making changes to this sector. The three new executive orders apply directly to the public sector swamp which most objective observers would agree needs to be drained.

We need to stop our national bleeding somewhere or we are headed towards the fate of all nations or empires which have buried themselves in debt- economic and societal collapse.

Government was intended to be limited according to the original intent of the Constitution. That intent has been demolished and $21.2 Trillion of national debt with no end in sight confirms it. These orders are minor steps in the right direction which of course the State as supreme left will fight with all of their very “red” blooded energy.

If the Constitution Was the Solution, Why Hasn’t It Worked?- Part Seven

If the Constitution Was the Solution, Why Hasn’t It Worked?- Part Six

If the Constitution Was the Solution, Why Hasn’t It Worked?- Part Three

Previous Post UK Displays Its Totalitarian Side- Jails Activist for Covering Trial of Islamic Pedophile Ring Next Post Were the Illuminati Real?