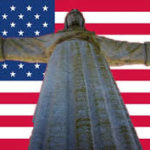 After becoming an adult, I’ve always felt a bit uncomfortable about reciting the pledge of allegiance. As a school child, I never questioned it which I suppose is normal.

As I became an adult however, it kind of rankled me to place my hand on my heart and pledge allegiance to a government which I was recognizing more and more as an enemy not an aid.

Perhaps too, it may be because it smacks of the “love it or leave it” mentality of the narrow minded patriot with “my country right or wrong” principle as their philosophical backbone.

I guess what is more important to me, more than blind patriotism, is personal freedom supported by a questioning of the acts and motives of government. The pledge on the other hand smacks of blind allegiance to a State with deference to the political powers of the Federal government. Not something I feel comfortable with at all.

Nevertheless, once you do a little homework on the origins of the pledge, perhaps my uncomfortable feelings are justifiable. What’s Conservative About the Pledge?

In a 2003 article from the Cato Institute, Gene Healy writes about the origins of the pledge and its meaning:

[quote]It’s probably too much to ask politicians to reflect a little before they lunge for a political hot-button issue. But any conservatives so inclined should think about what they’re defending. What’s so conservative about the Pledge? Very little, as it turns out.

From its inception, in 1892, the Pledge has been a slavish ritual of devotion to the state, wholly inappropriate for a free people. It was written by Francis Bellamy, a Christian Socialist pushed out of his post as a Baptist minister for delivering pulpit-pounding sermons on such topics as “Jesus the Socialist.” Bellamy was devoted to the ideas of his more-famous cousin Edward Bellamy, author of the 1888 utopian novel Looking Backward.

Looking Backward describes the future United States as a regimented worker’s paradise where everyone has equal incomes, and men are drafted into the country’s “industrial army” at the age of 21, serving in the jobs assigned them by the state. Bellamy’s novel was extremely popular, selling more copies than other any 19th century American novel except Uncle Tom’s Cabin.

Bellamy’s book inspired a movement of “Nationalist Clubs,” whose members campaigned for a government takeover of the economy. A few years before he wrote the Pledge of Allegiance, Francis Bellamy became a founding member of Boston’s first Nationalist Club.[/quote]

To my mind, those who claim to be conservatives should not genuflect unquestionably in obeisance to an idol of the State. Those who claim to be Constitutionalists (which has become another idol in its own way) recognize that the original intent of the Constitution was to give limited powers to the Federal government, as primarily outlined in Article 1, Section 8.

Even a careful reading of the so-called Supremacy clause in Article VI will reveal a limitation of Federal authority as follows:

Note carefully, “the laws of the United States which shall be made in pursuance thereof“. The clear meaning is that only those laws made “in pursuance of” which is to say those which adhere to those permitted under this Constitution shall be supreme over those of the States.

A quick reference to the Bill of Rights affirms this interpretation when you read the 9th and 10th amendments:

The enumeration in the Constitution, of certain rights, shall not be construed to deny or disparage others retained by the people.

The powers not delegated to the United States by the Constitution, nor prohibited by it to the States, are reserved to the States respectively, or to the people.

These amendments make clear that the assignment of certain rights in the Constitution does not deny or disparage all of the other rights held by the people and the States themselves.

The pledge eliminates these distinctions. One blindly pledging themselves to a flag representing the Federal government or the State makes no such divisions of Federal, State or the freedom of the individual. Instead, one blindly confirms his full allegiance to the State- right or wrong.

Can that truly be called a conservative principle? I suggest not.

Leftists are the ones who in actuality pledge their full allegiance to the nanny State, even if its one they wish to replace with another nanny State. They are the ones who wish to permit the State to have full authority over its citizens which includes all of its wealth and possessions.

As a Conservative and Christian, I find that attitude disturbing and reprehensible. Thou shalt not steal is a basic tenet of the Commandments as well as a guiding principle for societal order extending far back in recorded history including the earliest days of biblical Genesis. A person should be entitled to trade his time for income in a contractual agreement with an employer or in their own business and be able to retain their income as the fruits of their labor.

The income tax once openly recognized that principle. On your tax returns it once affirmed in writing, up to only about a decade ago, that the income tax was a voluntary act. That little deference to reality has been quietly removed as leftism has grown in power and scope, along with our Federal Leviathan. Now, we are expected to bow ourselves and advance as much of our incomes as the State deems necessary as a sacrifice on the altar of the governments (Federal, State and Local) without protest. hours. A slave is someone who, after all, works for free.

I work. I earn. I pay a large chunk of my earned income, the fruits of my labor, to one of the three governments not to mention another big chunk to the banks in the form of a mortgage. Leftists think this is permissible and acceptable. I do not. They label it whining. I call it blind obeisance and a theft of your personal power.

I believe a person should be entitled to voluntarily distribute their income and not have it removed through the coercion (hidden or visible) of a government which determines how my money should be spent. That is, on murder in the form of wars which have dragged on for over a decade with no end in sight or in the form of abortions of convenience which terminates a baby’s right to life for the assumed social benefit of a potential mother.

Back to the Pledge

So, if I profess to feel a bit uncomfortable pledging allegiance to an idol representing government gone wild, please forgive me. I value freedom above blind allegiance. My bad.

However, in the interest of the 1st and 9th amendments and with deference to my Christian God, I think I do have a valid point.

For leftists however, as demonstrated in Berkeley and now at other conservative speaking events, free speech is not a valued philosophy these days.

Consequently, they will probably not agree. Kind of makes the pledge a bit of hypocrisy though, now doesn’t it since our Republican form of government is based upon the Constitution and Bill of Rights including the first amendment right of speech?

Of course, hypocrisy seems to be a valued ideology of the left these days as well.

Ask Hillary and Barack, who are given a free pass on violations of law and liberty without question while we pursue an evidence-less demon called “the Russians” which Trump has been accused of courting to explain the Hillary defeat and the Democrats overall loss of seats in the general election by default as well.

This, of course, is pursued at taxpayer expense which is yet more theft and a waste of time and money by the State to which we supposedly pledge. Yet another reason to feel no guilt about supporting a “right or wrong” State.