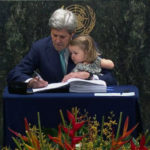 Friday was Earth Day. The first one was in 1970. It was garbage science then with apocalyptic predictions that failed, not barely, but with spectacularity.

American Enterprise Institute’s Mark Perry a professor of economics and finance at Univ. of Michigan’s Mark Perry- Univ. of Michigan Professor of Economics and Finance

Flint campus noted 18 very wrong predictions from the first Earth Day. (This has been done over the years by other writers and sites but the list has been increasing in numbers as time has gone on.)

Some predictions of note:
Atheist Paul Ehrlich: Population will inevitably and completely outstrip whatever small increases in food supplies we make,” Paul Ehrlich confidently declared in the April 1970 Mademoiselle:
[quote]The death rate will increase until at least 100-200 million people per year will be starving to death during the next ten years.[/quote]
Hmmm…that hasn’t happened yet, has it?
How about this one?
Ehrlich sketched out his most alarmist scenario for the 1970 Earth Day issue of The Progressive, assuring readers that between 1980 and 1989, some 4 billion people, including 65 million Americans, would perish in the “Great Die-Off.
Or this from Denis Hayes, the chief organizer for Earth Day:
“It is already too late to avoid mass starvation,” declared Denis Hayes, the chief organizer for Earth Day, in the Spring 1970 issue of The Living Wilderness.
Read the full article here.

UN Paris Climate Accord Signed by the U.S. on Earth Day


Of course, it was hailed as a planet saver by the media. Obama in December of 2015 represented it as the “best chance to save the planet we’ve got”.


Presidents, prime ministers, dictators, and potentates from 175 countries gathered at the United Nations in New York in our nation Friday (Earth Day) to sign the UN’s Paris climate accord. Supporters all say it is aimed at slowing as an article in the New American put it: “the (fictitious) crisis of global warming by John Coleman, founder of the Weather Channel with more than 60 years as a meteorologist notes:
[quote]When all the scare talk is pushed aside, it is the science that should be the basis for the debate,” says the Weather Channel founder.” And the hard cold truth is that the basic theory has failed. As a skeptic of man-made global warming, I love our environment as much as anyone,” said Coleman.”

I share the deepest commitment to protecting our planet for our children and grandchildren. However, I desperately want to get politics out of the climate debate. The Paris climate agreement is all about empowering the U.N. and has nothing to do with the climate.[/quote]

Coleman points to UN climate chief Christiana Figueres statements calling for a “centralized transformation” that is “going to make the life of everyone on the planet very different” to combat the alleged global warming threat.

Coleman asks, “How many Americans are looking forward to the U.N. transforming their lives?”

Coleman quotes another top UN IPCC official, Dr. Ottmar Edenhofer, who admits that it is the UN’s policy “redistribute de facto the world’s wealth by climate policy.”
Dr. Edenhofer has further admitted that all the panic over climate “has almost nothing to do with environmental policy”; it’s all about redistributing the world’s wealth.
Guess who gets to do the redistributing in this scheme of things.
Here’s what Edenhofer said: [quote]One has to free oneself from the illusion that international climate policy is environmental policy. This has almost nothing to do with the environmental policy anymore, with problems such as deforestation or the ozone hole.[/quote]

It’s Not About Climate Control

It’s not about climate control, as with gun control, it is about people control. The fact is, if you control the energy resources, you de facto actually control people’s lives.

Bernie and Hillary, of course applaud this and play it to the hilt. Like the political parasites that they are they will feed off of the media hype and the people’s naivete on facts around this issue (aside from the disproven UN IPCC “science” which they falsely claim has consensus validation)  to garner votes. I’ve already seen a Hillary ad playing up the Paris Accord as a victory for the people.

However, despite the UN’s IPCC (Intergovernmental Panel on Climate Change), there is no real consensus among scientists on the issue. In fact, there are some strong and informed opinions opposed to the claims.

For example, qualified scientists and climate experts like Bjorn Lomborg, the Danish author, environmentalist, and professor of political science and philosophy, who accepts climate change as real doesn’t buy the claims.

On the accord signing, Lomberg stated:
[quote]”Politicians will vaunt U.N. treaty, but its costs far outweigh its meager benefits.”[/quote]
In an op-ed today for USA Today, entitled Climate change is real, but Paris treaty won’t fix it Lomberg wrote:
“My own research and the only peer-reviewed published assessment of the Paris agreement used the United Nation’s favorite climate model to measure the impact of every nation fulfilling every major carbon-cutting promise in the treaty between now and 2030. I found that the total temperature reduction will be just 0.086 degrees Fahrenheit by 2100.”
[quote]This is likely to be among most expensive treaties in the history of the world,” writes Lomborg. U.S. promises alone — to cut greenhouse gas emissions 26%-28% below 2005 levels by 2025 — would reduce gross domestic product more than $150 billion annually.[/quote]

Meanwhile, our wonderful politicians have just traded even more of our national sovereignty over to the UN through another treaty.

Foolish and naive “progressives” think we are saving the earth when in fact the elite who call the shots are simply fashioning our shackles. Like gun control prevented the Paris massacre, climate change accords like this will resolve nothing and be yet another way to reel in our disappearing freedoms and our Constitutional rights, whatever is left of them.

Yet another example of how the American experiment has failed and why we need to stop relying on politicians to resolve our lives.