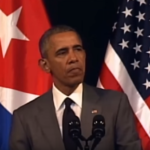 This dude is supposed to be our “leader” and he doesn’t even know what form of government our Constitution framed.

Describing our current campaign to his Cuban audience during his recent visit, he calls the fact that there are:
[youtube_advanced url=”https://www.youtube.com/watch?v=R2ucFwHhW2M&feature=em-upload_owner#action=share” controls=”no” rel=”no” theme=”light”]
“Two Cuban Americans in the Republican Party running against the legacy of a black man who is President while arguing that their the best person to beat the Democratic nominee who’ll either be a woman or a Democratic socialist. Who would have believed that back in 1959? That’s a measure of our progress as a Democracy.”
Democracy? President Obama apparently doesn’t know what form of government we are supposed to be- a Constitutional Republic.
Democracy is never mentioned in the Constitution because we were never intended to be one. See Federalist #10 by Madison for why.

Instead Obama calls our Presidential campaign a measure of our progress as a Democracy. Perhaps, it also betrays where he is leading us. After all, according to the Communist Manifesto, the triumph of Democracy is Communism.

No problem when speaking to an audience of Communist Cubans, but it should be a problem for Americans here. The operative words there are “should be”.

The Ideals That Drive Every Revolution?

Tragically, too few have taken notice while it has progressed to where it is today. Unfortunately, the dude has been permitted to get away with just about everything he does and says for the most part, regardless of its permissibility or applicability under what used to be our “rule of law”. Nowadays, our so called rule of law is paid only lip service at best, if even that.

Our penalty for this ignorance? Over 77,600 pages of regulations in the Federal Register and a government that has run up a bill of over $19.2 Trillion or $60,000 per man, woman and child. Complacency does have a price. We are all paying for it whether you acknowledge it or not.