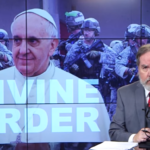 First of all, as a former Catholic and Catholic school student for my first 6 years of education, I am fully aware of the beliefs and practices of Catholicism. I don’t practice the religion now although still consider myself Christian, perhaps even more so.

That said, I was not surprised to discover the Pope handing President Trump, an encyclical on climate change written by collectivist globalists who advocate depopulation and revere Gaia (Mother Earth) which would make them Pantheists (pagans) not Christians.

An encyclical is a document which is signed by the Pope which expresses his personal opinion or that of contributing authors. While it does not bear the authority of a Papal Ex Cathedra for the church, it does carry the authority of the Pope, even if it is simply his opinion, and thereby some weight for Catholics. Who are some of the Pope’s advisers for this encyclical? Let’s take a look at two of the four primary authors of the encyclical.

The climate change encyclical advisers include Jeffrey Sachs, a hard core socialist who is also a depopulationist. At a 2007 international lecture Sachs claimed that ‘We are bursting at the seams’ referring to our current world population. Sachs focuses on Africa believing depopulation would make it thrive. Not a very Catholic ideal for a religion that on the whole supports Pro Life and welcomes children as a gift from God.

In 2009 Sachs addressed the annual conference of the Party of European Socialists and described his address to these hard core leftists as a “profound honor”. He said they were heirs and leaders of the most successful economic and political system in the world- Social Democracy.

I don’t know where Sachs is getting his facts but the socialist idea has failed or is in the process of failing, economically in particular, everywhere it has been applied. See the current situation in Venezuela for details.

Hans Joachim Schellnhuber– Friend of Gaia and the Queen of England

Schellnhuber was appointed a member of the Pontifical Academy of Sciences in June 2015. He was one of the four presenters of Pope Francis’ new encyclical on the environment.

Schellnhuber is another depopulationist who wants us to get down to 1 Billion people or we will have a collapse of the earth.

Schellnhuber is an atheist who believes in “Gaia, but not in God”  According to Schellnhuber, “the earth is cognizant of us and doing things to get rid of us” That would also make him a card carrying pantheist. Again, not exactly a Catholic nor Christian value which from Genesis states that man has dominion but also stewardship over the earth “be fruitful and multiply”.

Schellnhuber believes society should be managed by an elite group of “wise men”. He refers to this idea as his “master plan” for the “great transformation” of global society. Not much in step with the Christian bible which clearly states in Psalm 146:3 “Put not your trust in Princes nor in the son of man in whom there is no hope.” let alone the Catholic church.

Schellnhuber is a member of the Club of Rome and was also involved in the Anglia University global warming scandal in Great Britain.

While Catholicism is considered a Christian religion, it is only partially so. One may wonder why it’s formal name is Roman Catholicism. That is because it was initiated as a response to the growth of Christianity which could not be controlled through Roman persecution. So they created their brand of religion which was State controlled and incorporated popular pagan factors to enable them to be able to embrace this new State religion.

It’s the old- Well, if you can’t beat them, join them. The practice is still being used in China today with its state approved Christian brand of religion that is also carefully watched and controlled by the Chinese Communist government. In China, if you aren’t a member and a practicing Christian, you are subject to arrest and persecution by the State. Kind of how it was in Rome after the advent of Roman Catholicism.

Now, devout Catholics may reject this, because the Catholic claim is that the Church was initiated by St. Peter who was chosen as the first Pope. However, there is no evidence that Peter ever went to Rome. Additionally, the rock that Christ was referring to was himself not Peter.

Nevertheless, one has to wonder how stuff like the above encyclical makes its way into a church that is supposed to be Christian. Christianity on the other hand in reality has its authority in the bible, not the Pope. This, of course, led to Martin Luther’s 95 Theses which is credited with initiating the Protestant movement once the bible began to reach the common man with the advent of the printing press.

Too much to cover here but if you are interested in more information on the topic I would start with the following short presentation from the Know Your Enemy series on YouTube:

Not everything is as it seems these days. Keep your mind open.

New Zealand Mass Shooter Is Not a Conservative: Rather a Far-Left Eco Fascist

Previous Post The Hypocrisy of Politicians- Corrine Brown Indicted and Found Guilty on 18 Charges of Fraud and Tax Evasion Next Post The Virginia Congressman Shooting- More Gun Control or Not?