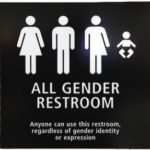 Obama issued a transgender decree to the public schools essentially ordering them to accept transgender choices for any bathroom they choose. Yet another example of how public schools have become an instrument of indoctrination rather than education which is an indication of why scores have been falling in math and science. Instead of placing emphasis on developing practical life skills like the three R’s (reading, riting and rithmatic), the emphasis is on enforcing political doctrines and fashioning world views rather than usable work skills.

Now, apart from the fact that the population of transgender students has got to be pretty low, all students and teachers are forced to accept the concession to this tiny minority whether they want to or not. Let’s suppose you are a normal human being who is attracted to the opposite sex as necessary for the continuation of the population and you think people who are transgender are a bit strange. According to the Marxist de-emphasis on family which Obama’s focus on what is important to pay attention to forcibly encourages, your point of view doesn’t count. What counts is that you bend to the will of the Federal government and most particularly his majesty the President.

The fact is this letter/decree is not legally enforceable.  Critics condemn this as Christian bigotry. The answer to that statement reflecting anti-Christian bigotry is, “So What?” The fact is, this is fully within the jurisdiction of their local and State authorities. In case anyone is still using our Constitution, which all elected representatives including the President take an oath of office to defend and uphold, the 10th amendment of the Bill of Rights clearly states:

[quote]The powers not delegated to the United States by the Constitution, nor prohibited by it to the States, are reserved to the States respectively, or to the people.[/quote]

This, in turn is preceded by the 9th amendment which also clearly states:

[quote] The enumeration in the Constitution, of certain rights, shall not be construed to deny or disparage others retained by the people.[/quote]

Clearly then from a Constitutional point of view, this is a State and local issue. It is fully within the jurisdiction of the NC State government or any local government to decide upon.

Additionally, being a social and cultural matter, this is a matter to be settled by the citizenry themselves and clearly NOT the Federal government.

In short, Obama has no authority under the Constitution he took an oath of office to uphold to involve himself in this social issue.

Nothing confusing here. It is plainly stated in our Bill of Rights.

So, despite the development of the Presidency into a Kingship, there is clearly no direct Constitutional authority which allows the executive to create laws (even on obscure issues like transgender bathrooms) through a letter.

However, there is a trump card which is quickly flashed in the letter to the schools, which also points to the danger of having the Federal government involved in our educational system btw:

[quote]Under Title IX of the Education Amendments of 1972, schools receiving federal money may not discriminate based on a student’s sex, including a student’s transgender status.[/quote]

Reading between the lines, if you take public money, we own you and your students.

The interesting mechanics of how this works is that the Federal government forcibly takes money the citizens work for through the legalized theft of the Federal income tax.

A person works and earns income through their labor. However, before they even receive compensation for their time and efforts, it is taken out of their pocket by our magnanimous Federal government. Then, they take money which citizens rightfully earned through their labor, and use it as leverage to exert control over how our youth, and adults for that matter, should think and behave. If this smacks of tyranny, it should because this is how tyranny is exercised by tyrannical regimes.

This is not only is this a misuse of the legalized theft of the citizens earnings which the Federal income tax amounts to, it is additionally illegal under our Constitutional rule of law. As usual, the executive and Federal government is doing nothing more than overstepping its Constitutionally defined boundaries and should quite simply- butt out!

This is also known as cultural Marxism which is a form of control our developing Federal tyranny has been expressing more frequently as its controls grow. See the video below on details for the history and mechanics of how this insidious philosophy is being applied: Reality dictates that men and women hook up as they say and have children in order for a society to provide for its continuation. A human being with normal impulses responds to this reality. That is not strange nor abnormal, rather quite expected of a young person. It is a quite natural way for society to assure its continued presence.

It’s also quite normal for a child to be raised by a mother and father of the opposite sex as well. It may not be perfect with the abnormal emphasis in today’s world on immorality, but it is an expected arrangement that tends to lend stability to a moral society.

These are natural points of view that are supported by the plumbing of each individual as expressed in nature. Males and females are attracted to each other. They choose to couple. They have children. They raise them hopefully as respectful and moral human beings in a stable family unit.

Nothing confusing here it would seem. Very much in line with the biblical Christian view from which the concept of marriage and family in our early history developed. Now however, there is another point of view. One that you will not find in the Christian bible but rather in another bible- the Communist Manifesto:

[quote]Abolition of the family! Even the most radical flare up at this infamous proposal of the Communists.

On what foundation is the present family, the bourgeois family, based? On capital, on private gain. In its completely developed form, this family exists only among the bourgeoisie. But this state of things finds its complement in the practical absence of the family among the proletarians, and in public prostitution.

The bourgeois family will vanish as a matter of course when its complement vanishes, and both will vanish with the vanishing of capital.

Do you charge us with wanting to stop the exploitation of children by their parents? To this crime we plead guilty.

But, you say, we destroy the most hallowed of relations, when we replace home education by social.

And your education! Is not that also social, and determined by the social conditions under which you educate, by the intervention direct or indirect, of society, by means of schools, etc.? The Communists have not invented the intervention of society in education; they do but seek to alter the character of that intervention, and to rescue education from the influence of the ruling class.[/quote]

Quite a different emphasis than that of the biblically based Christian isn’t it? As stated in Matthew 19:4-6

[quote]4 Have ye not read, that he which made them at the beginning made them male and female,

5 And said, For this cause shall a man leave father and mother, and shall cleave to his wife: and they twain shall be one flesh?

6 Wherefore they are no more twain, but one flesh. What therefore God hath joined together, let not man put asunder.[/quote]

The Obama letter emphasizing transgender bathrooms in public schools betrays where Obama’s heart really resides. The contrast is obvious. Transgender emphasis is not an emphasis encouraging a biblical union of man and woman but rather an emphasis that engenders confusion of what would develop, if not interfered with, in the normal course of a stable human being.

Males couple with females, have children and raise families. Societies, cultures and nations are the result.

However, the real battle revealed in the Obama letter is not one emphasizing Christian normalcy but rather, the Marxist dismantling of the family unit with the replacement by the State as mother-father and final authority.

The real battle here is between the Christian point of view validated by biological normalcy and the Marxist world view unsupported by natural biological states. More plainly expressed, it is in reality a battle between the God of the bible and normal biological development and the Godless view of Marxism based on human imagination.

All the rest of this issue is in reality just window dressing obscuring the real intent. Of course, it is wrapped up with a little guilt to make students feel deficient because they are being “socially biased”. However, is it really biased to find transgender bathrooms a bit alien? Methinks not.

Like I stated in the title, public schools- indoctrination not education.

As for the transgender choice, is that not their own self selected problem? They chose to confuse their sexual identity. Why is it necessary to force everyone else to see it their way now?

And let’s not mention that you have to be legally 18 to choose to have a transgender operation anyway, unless the parents make the choice for their offspring. This means that the issue will probably not arise in our schools to begin with. It is simply another way to influence the thinking of youth through the mechanisms of cultural Marxism.

Meanwhile, as we mire in debt with ongoing wars continuously draining our society of its wealth, this is the battle our so-called “leader” chooses to fight?

Indoctrination not education into the Marxist in Chief’s world view and a battle for the mind of our youth is the real target in this move. Another move for control over the masses by the Fed.

It should be ignored regardless of funding. Nevertheless, teachers fearing for their continued incomes will unfortunately likely bend in deference to their Lord and Master. Why, after all, bite the hand that feeds you even if it is culturally odd and unnatural? Aliens have rights too don’t they? However, under the view of Marxist liberalism, those citizens who choose to disagree do not. That is, if it transgresses the dictates of the Feds.

Subjects are not permitted to have opinions. They are provided to them upon the approval of their owners.