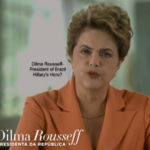 Hillary demonstrated her failure to grasp economic reality back in 2010 at a speech given at the Brookings Institute on January 27, 2010. She was asked by Kemal Derviş, the Brookings Director their Global Economy and Development Program, how do you manage between the fiscal responsibility to the poorest segments in the US and global populations while strengthening economic recovery?

Her reply demonstrates how little she understands about economics in the real world versus the idyllic visions of globalists based on Marxist inspired idealism.

As part of her answer as noted in the video above Hillary replied:

[quote] I also believe you put your finger on one of the biggest international problems we have, and I’ll just — you know, this is my opinion; I’m not speaking for the administration, so I will preface that with a very clear caveat.

The rich are not paying their fair share in any nation that is facing the kind of employment issues, whether it’s individual, corporate, whatever the taxation forms are. And I go back to the question about Brazil.

Brazil has the highest tax-to-GDP rate in the Western Hemisphere. And guess what, it’s growing like crazy. And the rich are getting richer, but they’re pulling people out of poverty. There is a certain formula there that used to work for us until we abandoned it, to our regret in my opinion.

So, my view is that you have to get many countries to increase their public revenue collections in order to make investments that will make them richer over the long run. [/quote]

Well, perhaps the words should have been reversed in Hillary’s statement. It was growing but based on a naive and crazy way in that it did not reflect the real world.

The chickens have come home to roost as a result of Brazil’s socialist inspired “highest tax to GDP rate in the Western Hemisphere”. According to Forbes in a January 14, 2016 article:

[quote]Brazil isn’t the same country it was in 1930, but it’s economy is sure looking that way.

The country is facing its worst economic crisis since the Great Depression in the United States. This year will be another year of contraction. Labor markets are shedding employees and inflation, once under control, is now over 10.6%. There is no end in sight to this crisis. China won’t save it. A weaker dollar won’t save it. The impeachment of Dilma Rousseff won’t save it either. A lot of Brazil’s problems are boring, old school budget woes. The fiscal picture in Brazil is as grainy as a black and white photograph from the 30s. It dominates how corporate and portfolio investors view Brazil. And it has many believing that the country might not hit bottom this year, as the World Bank forecast last week.

The economic, political and fiscal outlooks in Brazil have “deteriorated significantly” in the past few months, according to Barclays Capital analysts led by economist Bruno Rovai in New York.[/quote]

Sure doesn’t sound like it is growing like crazy any more does it? The growth was an illusion fueled by funny money and other people’s wealth. And like all of these Marxist inspired wealth distribution plans, they always produce the opposite of their idyllic intent.

Brazil is not an isolated case of failed socialism in our modern times however. One of their neighbors shares their fate as well.

The socialist economic ideas of Hugo Chavez, inspired by the Marxist Cuban model of Fidel, were initiated with great promises. Using the idyllic cry of populist Marxists, Hugo promised to help the poor and disadvantaged. As always in the Marxist/socialist model, it was with other people’s money filtered through the State.

The same basic model of Bernie Sanders and Hillary with her Marxist share the wealth idea to tax the Corporations to make them “pay their fair share”. A stream of never ending taxation which ultimately lands in the lap of the average citizen in the form of job losses and increased costs of goods and services.

As Francisco Rodriguez, chief economist of the Venezuelan National Assembly who in September 2000, took over a research team with functions broadly similar to those of the U.S. Congressional Budget Office in the Chavez’s government stated:

[quote]Chavez’s political success does not stem from the achievements of his social programs or from his effectiveness at redistributing wealth. Rather, through a combination of luck and manipulation of the political system, Chavez has faced elections at times of strong economic growth, currently driven by an oil boom bigger than any since the 1970s.

The change can be broadly characterized as having four basic dimensions.

First, the size of the state has increased dramatically. Government expenditures, which represented only 18.8 percent of GDP in 1999, now account for 29.4 percent of GDP, and the government has nationalized key sectors, such as electricity and telecommunications.

Second, the setting of prices and wages has become highly regulated through a web of restrictions in place since 2002 ranging from rigid price and exchange controls to a ban on laying off workers.

Third, there has been a significant deterioration in the security of property rights, as the government has moved to expropriate landholdings and private firms on an ad hoc basis, appealing to both political and economic motives.

Fourth, the government has carried out a complete overhaul of social policy, replacing existing programs with a set of high-profile initiatives — known as the misiones, or missions — aimed at specific problems, such as illiteracy or poor health provision, in poor neighborhoods.[/quote]

So, how has this economic manipulation worked for the people? Let’s get a current picture:

[quote]Venezuela’s economy continues to crumble, reflecting years of economic malpractice and heightened vulnerability due to weaknesses in the dominant oil sector.

Venezuelan oil production fell to a multi-year low in August, due to operational challenges over long-lasting under investment and suppliers scaling back their activity over delayed payments. The combination of depressed prices and record-low oil production raised the alarm ahead of multi billion dollar debt payments due this year and next.

Car sales contracted a sharp 83.4% annually in August, highlighting the adverse impact of distorting currency controls and a shortage of goods on consumption. The political situation has continued to worsen as the ongoing standoff between the ruling party and the opposition recently intensified.

In early September, supporters of the opposition held massive protests in Caracas to increase pressure on the government to approve a recall vote against President Nicolás Maduro.[/quote]

In short, like all of the idyllic socialist schemes as dreamed of by Karl Marx- Venezuela is a morass of economic failure!

If you want more of this kind of economy, vote for Hillary. These kind of economies are what she endorses. Brazil? No thanks. And this is her model of success?

The public rejected Bernie. Hillary deserves the same fate unless you want more of the same – a faltering economy based on debt headed for destruction.

Donald? Who really knows? He isn’t a true politician. But hey, what have the politicians of both parties really given us? A debt over $19.5 Trillion and growing towards the same collapsed economies of Brazil and Venezuela and every socialist based economy.

I’m not expecting any politician to solve our problems, but really what choice does the public have- Gary Johnson? Dream on.

Previous Post Will Donald Trump Save the World? Next Post Trickle Down Economics? A Made Up Term That Doesn’t Exist in Economics