Will Donald Trump Save the World? 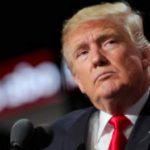 Already the Trump – Hitler comparisons are being rolled out by the indoctrinated liberals. Obama’s popularity deemed him the second coming of Christ but Trump is the second coming of Hitler? Kind of a transparent bias isn’t it? Ad hominem attacks on Trump will become predictably standard fare now that he has captured the public’s attention.

What intrigues me about Donald Trump is that he is not really a politician yet he is running for the highest political office in the nation.

Trump is running for political office but his background is not political. This has the pundits stymied and a bit on edge. Hillary’s supporters and the Corporate controlled media will now roll out the ad hominem attacks to paint Trump as a bigot or tyrant or whatever they can do to assassinate his character. This is the typical response of a true believer when facts get in the way of their fantasy.

Of course, Hillary’s criminal background will get a free pass like Bill’s did as the FBI decision recently demonstrated.

Fact is, the dudes never been an elected official, yet he managed to garner a record number of votes in the Republican primaries.

Of particular interest is that the political leaders in his own party despised him to the point of wanting to get rid of him despite the record number of votes.

One has to believe there has to be something good about someone whom corrupt, power mongers hate.

Is Donald the Change We Need?

Let’s be honest. The Republican, and Democrats too for that matter, have become predictable bores. Unless you are a sucker, brought up to be a liberal and look to government to make everything bad go away or have something to gain, there is not much to get excited about when you watch their speeches.

Politicians spin everything to reinforce the accepted media narrative which is always more government and less personal freedom in these times. If the media says those buildings came down pancake style from jet fuel, they did. If they confirm that Kadafi must go, he must. If Lavoy Finicum was reaching for a gun and a threat in Oregon, well then he was a threat and his death by ambush was justified and on and on and on.

Donald flat out said that Hillary got away with a crime when she had a server at home with potentially compromising information on it and deleted over 33,000 emails. Not many politicians are willing to go out on that limb these days. A few like Rand Paul perhaps but most just sit on their thumbs and rotate with their mouths closed. The FBI can pardon criminals instead of prosecuting them in this twisted world where authority gets to be criminals along with Constitutionalists and Creationist teachers.

Free Trade deals are horrible and are hurting America says Donald. Yes they are. Repeal NAFTA? Really? Not many politicians willing to go out on that limb ‘cept Donald.

A few like Bernie Sanders may bring some focus to it, but look what else he brings to the table with us sitting at $19.3 Trillion in debt. Socialism? No thanks. Enough of that here already.

A bit of a shocker and well outside the media narrative. How many politicians would dare use that phrase?

Fact is, it is what we need to return to and right quick too, or we perish as a nation.

Globalism and globalists like Hillary deem to eliminate nationalism, not reinforce it. The public are sick of it as they watch jobs and manufacturing erode leaving them at home and less prosperous.

It helped fuel the Brexit vote to leave the EU BTW much to the chagrin of all of the UK’s controlling politicians including now former Prime Minister- David Cameron. Maybe it will fuel Donald’s campaign here and upset our controllers?

Islamic terrorism is a threat to all of us. Call it politically incorrect in our cultural Marxist society, but its the truth. The facts speak for themselves.

While they haven’t tied the Tunisian-born Mohamed Lahouaiej Bouhlel, directly to a terrorist organization, in Nice 6 suspects are now in custody. He texted for more weapons before launching his vehicle indicating he likely did not act alone.

However, it is no secret that his mind, while twisted (and frankly aren’t all terrorists twisted?), was under the influence of Islamic ideology. So really, does it matter if he was acting in concert with a formal terrorist group? It’s yet another example of what Islamic beliefs do to an impressionable mind.

Of the 84 people killed in Nice, 38 were from 19 countries other than France. Ten of them were children. One of them was an American student. That sounds like a threat to all of us to me. Not a politically popular stance but Donald tells it like it is.

Political correctness doesn’t matter to Donald despite the media attacks on his supposed bigotry. It is time to recognize that this is a problem that needs to be addressed head on, not be “politically correct”. Innocent lives are at stake and Donald is one of the few who isn’t afraid to say it. Obviously, not a politicians stance which is one of the reasons he garnered so many primary votes.

The admission that Obama has dangerously nearly doubled our national debt. Time to own that one, like it or not media.

Obamacare should be repealed. When? The sooner the better. Why’s Everybody Always Picking on Me?

The Obama administration has promoted division in our society and is incompetent.

Division yes. Incompetent not! They are very competent just not acting in our best interests.

Incompetence takes them off the hook by making them look like they are making mistakes. They are not. They are just marching to a different drummer. One with his hand raised in a fist.

Most true of all was the recognition that there is a large forgotten group here in the U.S. and he (Donald) will now give them a voice.

Oh yes, how so very true! That part even got jaded me a bit stirred.

It has also stirred a ground swell that appears ready to grow. People want their voice back over an oppressive Leviathan government stifling our freedom and throttling our voices with an obsequious media and pandering group of politicians bending to the will of whoever is the Commander in Chief.

The speech was refreshing, entertaining and quite frankly has energized the Republican party! It wasn’t particularly the standard political fare, but it said the things that many of the more aware citizens know and feel. And that is refreshing.

Some in the party wanted to generate a coup and get rid of Donald. Are they as twisted as the Islamic terrorists?

Donald ain’t blending. Opportunistic politicians stifled that movement. You don’t bite the hand that is feeding you as the adage goes.

For the most part, I liked what the man said. I found little to get angry about which is quite a change for me when watching a political speech these days.

Will he be able to keep his promises?

It’s hard to say. The corruption and dismantling of what is referred to as the “original intent” (That is, a small and constrained Federal government.) of the Constitution is very far along now.

Trump doesn’t really talk much about the Constitution. Why bother these days anyway. Between our Supreme Court, Presidents, their cabinets and our elected officials, it has been rendered nearly neutral it seems.

Hopefully, the man if elected will surround himself with people who do believe in constraint of government and in reducing it to a more manageable beast as well. From a business point of view, it seems that Donald gets that.

In the end, if he wins his results will be very much contingent upon who he puts into office to assist him in attaining his stated goals. That would be, of course, his cabinet and other choices. When all is said and done, this is where the real impact of a Presidential election is experienced by the citizens.

At this point, I am hopefully skeptical.

If he wins, there is a very strongly entrenched agent against change which will be working firmly against him. Will he be strong enough to override them? Will his wave of popular support bring others along with him to office? Honestly, probably not.

In this election, between the two- what choice does a sensible person have? It’s Trump or monkey as the David Letterman skit once played it. And you know who the monkey is.

Is Trump really the change we need? He is a non-politician who understands organization, has handled big money, understands how the money game is played, does not reject corruption nor conspiracy out of hand and has a penchant towards the unspoken for.

At the very least, this could be interesting. Certainly, the campaign proves to be.

I was a bit surprised by Trump’s reference to evangelicals. Now, one could think he was pandering but he was actually a bit humble about it noting that it was support he probably did not deserve.

Perhaps not, but if there anything real to his thank you maybe we could bring a much needed, maligned and neglected Christian tone back into our government. Anyone who pays attention to biblical prophecy and its relationship to these times will understand how important this may be.

At any rate, this will be a very interesting Presidential campaign. The gloves are off and it may prove to be the most interesting one in our lifetimes.

I can hardly wait for the Presidential debates.  If Trump stays the course he has already set, they should be about as entertaining as one could hope for. A breath of fresh air to a stale and scripted affair that has been so predictable they are hardly worth watching. And never controversial either. After decades of predictable mediocrity, this could be one heck of a fall season.