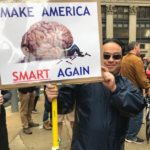 The left loves to rewrite and redefine. Terms that people accept as meaning one thing get twisted about through repetition and reinterpreted to mean in many cases the polar opposite of the commonly accepted meaning. It’s called political correctness.

If you believe in personal freedom from the oppressive force of government– you’re just wrong and probably a racist to boot! Government secures your rights and gives you them. The State defines your freedoms.

The individual, their needs, individualism is non-existent and do not count. Even apparently, the rights of the unborn baby, all the way up to birth now. This is the progress of progressivism?

Let’s take a look at how science has been redefined to support the left’s collectivist world view. Education or Indoctrination Into Their World View?

Just as the left has redefined the term freedom to mean “by” government not “from” government, they have also redefined science to fit more easily into their collectivist world view.

One way to obfuscate science is the throw it all into a blender, mix it up and come out with their definition of what they believe science really is.

First, they take everyday operational science which has produced many inventions and advances in technology. This science is the normal testable science which has been proven to work through designed experiments or trials to produce a product or effect to the benefit of human beings or life on the planet. It is empirically and typically materially based- focusing on a goal and specific intended results.

You know, the science that has given us all of those gadgets we fool around with, along with advanced medical discovery, planes, trains and automobiles- as the movie title goes.

But the left has a collectivist agenda. They want to make the State supreme and place humans under its authority and tyrannical thumb (although they either skip or don’t even think about that tyranny part because they don’t actually connect the dots of applied ideology to real time results).

So, they have to eliminate any dependence on any authority other than the collective- represented in the State. So, how do they do this with science?

Well, there is another approach to science which we can label as historical science. That is the application of logical, scientific thinking applied to how we got here- our orgins.

People are curious about how they got there in a sense larger than being born. They want to know, “Why am I here?” And, “What is my purpose now that I am?”

What you believe about how you got here is more critical than you know. It impacts your world view- which is to say your view of how you perceive the world around you. So, it’s an important question to answer for yourself.

However, historical science is by the nature of its subject- back in history. No one alive could have been there at the origin of human life, so you can’t reproduce it through experimentation.

Necessarily then, origins science is speculative. It must look at any existing evidence and rely on projections to make best guesses as to how life arose.

Nothing set in cement when it comes to our origins. You simply have to look at the evidence of our beginnings and speculate on how it happened. The world view you currently hold will often, in fact, impact your interpretation of the evidence as well.

So what kinds of historical science models do we have? Basically three major ones:

Creation and ID either accept a Creator or see the possibility of one. So their world views have an explanation that involves intelligence which is supported they believe by the evidence.

Evidence like the difference between living things and non-living things are coded informational systems that express a purpose- DNA and its necessary coded components to make it work.

Evolutionists however don’t believe that living things and this universe arose from an intelligent agent.

Their world view is that over massive amounts of time, everything made itself up. Living things arose from random trials and errors over long periods of time by chance that worked. Eventually that “working” put itself together into living organisms which kept getting more complex until from microbes came man.

The real difference between the three models? Two world views accept a Creator. The other world view doesn’t.

The one that doesn’t believe in a Creator, evolution, thinks that since human beings are the most intelligent of the living beings in the world, they should also get to make up all the rules.

Man should rule each other so that we can make everything equal and fair for all. You know that “Power to the People” that never really seems to manifest in reality when all is said and done.

The problem is for the evolutionist/atheist is that God set forth laws in his Bible upon which Western civilization and our nation was built. This is a limitation.

It gets in the way of their idyllic dream of “Power to the People” which is the power to make stuff up, like genders, as we go along depending on what is working for the moment in time. Why get bogged down with fixed definitions of reality when everything is always “evolving”? Everyone is his own God. We don’t need some ancient book thousands of years old telling us what to do.

Plus, if we do this correctly they claim, this lefty thing they call Communism (really just a form of Socialism), there would be a heaven on earth. Of course, they completely ignore the fact that it has never worked yet- and never will because of the very nature of human beings which they put all their misguided faith in.

So, how do the lefties convince people to accept their idyllic dream? One way is to get them to redefine who they are and what is right. If they do that early and to enough people through repetition, what seemed wrong to them before will seem right to them now.

We’ll take a further look at that in part two of this series.