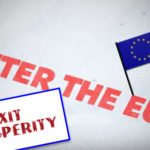 Brexit the Movie targets the British population with facts about how the European Union (EU) has had a damaging impact on the British economy. Now, you may at first think that a film targeting the British population has nothing to do with the U.S. However, you would be wrong. The EU is about massive regulatory control, something that has been growing here in the U.S. for decades, not “free trade”. This free YouTube video demonstrates how dangerous an agreement like the Trans Pacific Partnership (TPP) would be for our remaining liberties.

The EU is the model used to create the proposed Trans Pacific Partnership (TPP) which connects our economy directly to the European Union.

In fact, this free YouTube video actually functions as a preview of what is to come should we initiate the TPP here. You can watch Brexit the Movie below:

Here is what you will learn in the movie:

There is more in this film which is surprisingly candid. This could be due to the fact that it is not funded by Corporations. I alertly skimmed the long list of contributors during the credits, but did not see any Corporate names on the contributor list.

The full movie is one hour and 11 minutes long but moves along quickly and keeps your interest making it an easy watch. More importantly as noted in a previous post about the TPP, this demonstrates what the end result of an agreement with the EU will ultimately bring.

Watch this movie for free on YouTube and you will see how dangerous the TPP is for what is left of our freedoms and prosperity.

We don’t want to end up under the thumb of the globalists with agreements like the TPP and this film shows you why.

Previous Post The Public School Agenda – Indoctrination Not Education- Obama’s Transgender Decree Next Post Why British Politicians and Non-Profits Like the EU- No Brexit for Them.