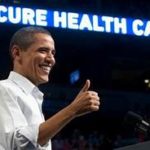 When Obama was still in office and Donald was campaigning for office some Obamacare increases exceeded 100%. They are still uncomfortably high in many states. The difference this time however is that the leftists who vociferously cheered Obamacare’s inception are now blaming Donald Trump for the premium rises. They forget that Obama promised premium reductions when he was selling the plan to Congress and the public- a promise that has never happened and never will.

The Real Fault Is In the Design

As pointed out in a previous post on the premium rise it is the way in which Obamacare has been put together which dooms it to failure. No insurance plan which rejects underwriting by guaranteeing coverage for ALL pre-existing conditions will ever work long term.

Anyone who thinks it will is engaging in self deception or simply does not understand how insurance works.

Maybe both. They don’t understand how it works and are therefore engaged in the La La land of self deception.

Donald Trump is NOT responsible for Obamacare premium rises. The design of Obamacare is, as previously pointed out in the last round of steep premium increases just before Donald Trump took office. (See previous article on this topic.)

In fact, rates would be even higher if the government were not using public money to help make up for the shortfalls.

Of course, we all feel that in inflationary cost rises as our growing national debt waters down the purchasing power of our earned incomes.

You Knew This Was Coming

Obama and his sycophants blamed George W. for 8 years for his failure to resolve basic issues which people elected him to resolve.

And now, the program that Obama lied about to pass- which is considered his greatest accomplishment- is failing to deliver on its lower premium promises once again.

[quote]Health insurers in multiple states could increase rates sharply on the Obamacare exchanges for 2019, with premiums in Maryland’s individual market set to jump as much as 91 percent.

By comparison, the average rate hike of nearly 5 percent sought in Pennsylvania’s individual market under the Affordable Care Act would be peanuts.[/quote] As noted by Robert Laszewski, President of the Health policy and Strategy Associates in Alexandria, Va.

[quote]PA got clobbered by the huge rate increases early and now that the prices are sky high it is not necessary for the carriers to increase the rates by big margins.[/quote]

Lefties ya gotta love em. When everything they touch turns to horse manure, they are masters at finger pointing. Not good at problem solving but really good at shifting responsibility for their failed idyllic dreamscapes.

Where the Blame Belongs

Perhaps the useful idiot leftists should turn that blame pointing finger around and acknowledge the inevitable failures of their own La La land ideology which was never based in actual reality.

As always, the public inherits their failed attempts to paint reality pink when it really comes down to black and white. Or in this case- common cents (pun intended).

As long as this Marxist inspired program lasts, expect more of the same– reduction in quality of service; continual increase in costs all across the board.

Hey lefties- grow a pair for once. Place the blame where it clearly belongs.

The human being you thought walked on water, who sold you a bill of goods designed to take over your lives, pulled one over on you.

Now, he gets to live a life of luxury.

And you genius’? Uh, left holding the bag which unfortunately the rest of us have to bear along with you. Thanks to Barack and his band of useful idiots.