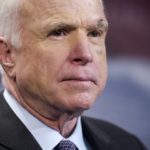 The vote on the Republican “Skinny Bill” failed because of two words- John McCain.

Murkowski and Collins were expected to vote no. Their votes were factored in already. Democrats knew who to go after to sink the bill. Senator Mazie Hirono of Hawaii, undergoing cancer treatment herself, appealed to McCain to “vote your conscience, vote with us” to defeat McConnell’s “skinny bill”. (What conscience?)

The vote was delayed for an hour while Republican’s Mitch McConnell and VP Mike Pence huddled with McCain to persuade him to change his mind.

As we now know, they needn’t have tried. McCain was a shoe in to scuttle the bill. It doesn’t fit the agenda of the ideology McCain has chosen to embrace. A truth you will not hear from the mainstream media.

McCain offered a feeble and disingenuous justification for his vote:

“We should not make the mistakes of the past that has led to Obamacare’s collapse, including in my home state of Arizona where premiums are skyrocketing and health care providers are fleeing the marketplace. We must now return to the correct way of legislating and send the bill back to committee.”

Anti-GOP fanatics who days earlier were cheering McCain’s cancer celebrated him as a hero for the vote.[/quote]

McCain posing himself as a conservative implying the bill did not go far enough is laughable. He has consistently demonstrated who his true master is and it is not the U.S. Constitution nor genuine conservatism. The man arose from cancer recovery to scuttle any attempt to undermine government control over what should be a free market service. It reveals who McCain truly is.

McCain poses as a Republican but in actuality he ideologically reflects the neo-con mold along with his bud- Senator Lindsay Graham. Neo-cons originally defaulted from the Democrat ranks because they rejected some of their core values. Neo-cons can be recognized by their actions and share the following traits:

The policies that McCain has consistently supported reflect all of these traits.

See the YouTube video below for a good overview of the neo-con ideology. In this excerpt from a longer film, Lindsay Graham is used to flesh out the guidelines for determining a neo-con:

McCain and the CFR

McCain is also a long term member of the Council on Foreign Relations (CFR).  Performing a little research on the CFR also clarifies how McCain’s actions are simply a reflection of who McCain really is ideologically.

The CFR is a group of globalists whose main goal is to foster the development of a New World Order or one world government. An article in the first issue of the CFR organ “Foreign Affairs” entitled “The Next American Contribution to Civilization” pushing ratification of the League of Nations gives us a clue as to the ideological purposes of the CFR:

[quote]Our government should enter heartily into the existing League of Nations, take a sympathetic share in every discussion broached in the League, and be ready to take more than its share in all the responsibilities which unanimous  action of the nations constituting the League might impose.[/quote]

Where would American sovereignty fit into this idyllic world view? In a nutshell, it does not. We would become a deferential part of the League whose sovereignty would take a back seat to the needs of the League.

While the League did not fly, its sister act the United Nations did. The UN founding took place in San Francisco in 1945 and more than 40 of the American delegates were members of the CFR. One of its leading architects Alger Hiss, later convicted as a Soviet spy, presided as Secretary over the Charter signing.

Using an $8.5 million gift from John D. Rockefeller, Jr. the UN purchased land for its headquarters on New York City’s East River. Later David C. Rockefeller would become the Honorary Chairman of the CFR until his death after residing as Chairman for 13 years.

The CFR is a big bank buddy. All of the “too big to fails” are Corporate members. Many key cabinet positions are populated by CFR members. Rarely is the UN opposed by our political representatives. John McCain falls right into line with that ideology as well.

McCain is, and has always been, a Republican in Name Only (RINO). He supports the UN and more government on key issues in particular. He always endorses more war. (In case you haven’t caught on yet, war is a favored friend of international “too big to fail” banks and NWO government.) He is a friend of big government and government power over the people. This is a reflection of the ideological tenets of neo-cons and the New World Order, globalist promoting CFR.

So, it was no surprise to me that someone with McCain’s ideological core would become the so-called “startling” opposition vote to the passage of the Republican “skinny bill”.

Someone had to take the fall. There was no way the globalists in government could permit a bill, which while still limited in its damage, could cripple Obamacare’s strangle hold over our medical marketplace and in turn the citizens of this nation.

Who better than a man who will not likely survive to face another election?

Lindsay Graham and other big government cheerleaders like Paul Ryan can play their hands at a later date if necessary. Why play all their cards now when all they needed was one default vote?

Collins and Murkowski must feel comfortable enough with their constituents to play their parts. To be “startlingly” honest, McCain- at this point in time- has little to lose.

No…….to me, McCain’s vote was nothing less than an expected outcome. Hopefully, the voter will awaken to McCain and his ilk but frankly I hold out slim hope of that happening.

Democrats and other anti-Trump forces celebrate this as another Trump loss.

Personally, I don’t blame Trump in any way for what happened in this vote. He and Pence both did their best to carry this off.

Trump’s agenda to make America great again by getting government off our backs is being opposed by those whose globalist gravy train is threatened both without and from within his own party. He can’t move along without help.

The New World Order crowd will do all they can to make certain that help is NOT forthcoming. Count on that. After all as Hillary put it, It Takes a Village, doesn’t it?

The sad truth is that Hillary’s “village” ain’t the masses friends. Of that we can be certain.

Trump didn’t lose. The people of this nation did. As Trump said, it may take a complete collapse of Obamcare before a change can really take place.

Watch for the single payer solution to arise after that happens. For the globalists, the solution is always more and more government. It always will be until there ain’t no more government to divvy up. See Venezuela for the details on how that process unfolds.