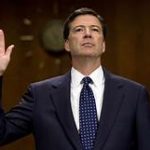 Ya Gotta Love the Don. Who Else in His Position Would Tell It Like It Is Without Pulling Punches?

[quote]The IG Report is a total disaster for Comey, his minions and sadly, the FBI. Comey will now officially go down as the worst leader, by far, in the history of the FBI. I did a great service to the people in firing him. Good Instincts. Christopher Wray will bring it proudly back![/quote]

On Fox Morning he said:

“I think Comey was the ringleader of this whole den of thieves,” Trump said. The Dems and lefties will, of course, be unloading on him saying how embarrassing it is to have a President say things like this publicly except….

Those of us that can actually objectively look at the evidence which has surfaced since the Mueller investigation began want to say the same things and probably even worse.

The Don is Right

These Anti-Trump renegades are a bunch of scum and Comey was a major ringleader. There are more that will remain in the shadows. There are some that will be dragged out by honest investigators. Some will be sacrificed as patsies to protect more important people- a common tactic of high level conspirators.

While they will never admit it and probably label it as “racism” (The preferred fall back position of the left since the Illuminati began in 1776 in fact.), Barack Obama was fully engaged in the nefarious activities to undermine Donald Trump’s candidacy and subsequent election.

He will likely never be brought to justice because they want his lily white (a figure of speech of course) axx to remain lily white. Fact is, morally (no reference to skin color, I don’t give a tinkers damn about that) the man is far from lily white.

I only hope this opens up Pandora’s box. Here is what I would like to see happen:

Those are a few of my quick suggestions. Feel free to add your own. Love to see this thing take off now in the right direction. Hope Donald does more than tweet to make it happen.

P.S.- There are still 2 more IG reports due to come out. One on the Russian Collusion investigation which includes the Russian Dossier info. Hang on, the fireworks may just be starting!

Previous Post More Facts About the Illuminati- Their Discovery and How They Resurfaced as the German Union Next Post Samantha Bee Calls Ivanka Trump a “c**t” On Air- Apologizes, Except Her Show is Now Bleeding Advertisers