NATO- The North Atlantic Treaty Organization which was ratified by the U.S. in 1949 is a prime example of deception by omission.

“They are determined to safeguard the freedom, common heritage and civilisation of their peoples, founded on the principles of democracy, individual liberty and the rule of law. They seek to promote stability and well-being in the North Atlantic area.”

North Atlantic area? Really now? Then how does that explain this headline?

NATO to Command US Troops in Afghanistan

A top U.S. military official says U.S. forces in Afghanistan are undergoing a major restructuring that will bring virtually all American troops under NATO command.

In fact, one might also take it a step further and ask, why are we sacrificing our blood and money at the hands of NATO since our Constitution states in Article I, Section 8 that Congress only has the power to declare war and that it also is:

“To provide for organizing, arming, and disciplining, the Militia, and for governing such Part of them as may be employed in the Service of the United States, reserving to the States respectively, the Appointment of the Officers, and the Authority of training the Militia according to the discipline prescribed by Congress;”

But the NATO Charter says: 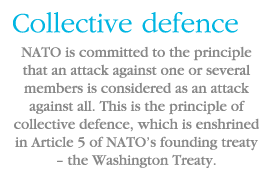 Of course, what is left out here of Article 5 of the NATO charter is that “if such an armed attack occurs, each of them, in exercise of the right of individual or collective self-defence recognised by Article 51 of the Charter of the United Nations”

The Parties to this Treaty reaffirm their faith in the purposes and principles of the Charter of the United Nations and their desire to live in peace with all peoples and all governments.

The clear reality here is that when our troops are placed under the command of NATO, in actuality we are placing our blood and citizen funded money at the altar of the United Nations. Where in our Constitution does it allow for our troops and money to be used to meet the needs and agenda of an international body like the United Nations? Or more to the point, why did our politicians ratify a treaty which places authority for our troops in the hands of an international body like the UN?

Something is rotten in the State of Denmark and nobody seems to be noticing as we are now being bombarded with commercials for the U.S. Navy which end with the catch phrase which you can now find at the top of the official U.S. Navy site:

World government under the UN anyone? The conditioning of the American mind to accept it hook, line and sinker continues.

Does anyone care that our national debt is being built up to profit the lender (international financiers connected to the Federal Reserve) the most but places the payment ultimately in the lap of every citizen? Does anyone care that while the media chants patriotism, our youth are being sacrificed at the altar of the UN? Guess not, sports and American Idol are far more important right?